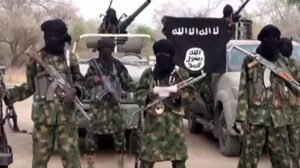 POLITICS NIGERIA learnt that that one of the missiles landed at Ajilari Cross area. Another landed near Maiduguri airport where there is a military base.

Per a source, one person died at Ngomari, while several others sustained injuries at Ajilari area.

Recall that earlier this month, Boko Haram attacked the same area with mortar bombs. The explosives landed on several houses around the vicinity causing extensive damage.

The governor of Borno State, Babagana Zulum visited the scene at the time, calling on the military to wake up to its duties just as he said he was setting up a committee to assess the damages.