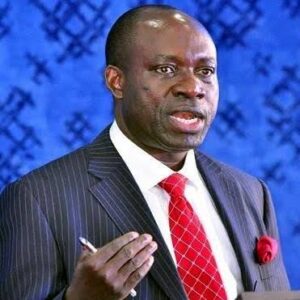 A former governor of the Central Bank of Nigeria, Chukwuma Soludo has emerged victorious in the Anambra governorship primary election of the All Progressives Grand Alliance (APGA).

Society gazette learned that Soludo garnered 740 votes to defeat other challengers in the party. He will officially represent the party in the governorship election scheduled to hold on November 6, 2021.

YOU MAY ALSO LIKE:   Ecobank Digital Series: Nigeria Will Take Full Advantage of the AfCFTA - Awolowo

It will be recalled that the former banker announced his intention to run for the state’s top position in February. Current state governor, Willie Obiano amongst other topshots in the party were present at the event.

Cheers broke out as Soludo was announced winner of the contest that took place in the state capital, Awka.

A few weeks ago, Soludo narrowly escaped death after unknown gunmen attacked him and entourage while he was campaigning in Isuofia, Aguata LGA of the state. Three of his police aides were killed in the attack.

Previous Crime has gone to “next level”, we need technology to combat it – Ganduje Tells IGP
Next Primate Ayodele Warns – ‘‘Boko Haram, ISWAP Will Fade Out But Another Tough Terrorist Group Is Coming’’