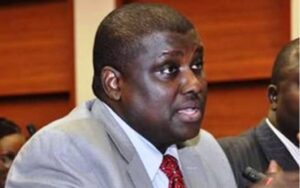 The Federal High Court sitting in Abuja has sentenced ex-pension boss, Abdulrasheed Maina, to eight years imprisonment having convicted him of stealing monies belonging to pensioners.

Justice Okong Abang sentenced Maina on all the 12-count charge instituted against him by the Economic and Financial Crimes Commission but noted that the jail terms would run concurrently.

“The fact of this case portrays the national decadence of the society we live in. It is unpleasant, immoral and dirty.

“Over 2.1 billion naira of pensioners funds was stolen; it is a clear case that the convict is inhumane. Some have suffered and died while waiting for their rewards on earth.

“Whereas the convict was feeding fat on their sweat, buying choice properties, driving bullet proof cars and living in affluence beyond his legitimate earnings.

“Dishonesty is an endemic disease in this country that requires urgent treatment to get at its roots,” he said.

The judge also observed that the financial institutions that Maina used to commit the fraud ought to have been arraigned in court as well.

YOU MAY ALSO LIKE:   SS2 Student Slit Throat Of 12-Year-Old Junior Colleague Who Refused To Run Errands

“UBA and Fidelity Banks provided the channel in which the defendant defrauded pensioners fund worth 2.1 billion just to shore up deposits.

“It is inhumane that the defendant used family members as a shield to defraud pensioners, some who have died,” he said.

Justice Abang held that the failure of the respective banks to probe the validity of the accounts left much to be desired.

YOU MAY ALSO LIKE:   Breaking! Kidnapped Female Students Married Off in Yobe By Abductors

“The bank failed to carry due diligence to carry out investigation on the real owner of the account,” he said.

He observed that without conducting requisite customer due diligence, the banks aided Maina to contravene the Money Laundering Act.

“I find the first defendant guilty in Count 1, 5, 8 and accordingly convicted.

He also convicted Maina on Count 2, 6, 9 which stated that he opened about 5 anonymous accounts with UBA and Fidelity Banks, thereby violating the money laundering Act.

The judge said that about N171,099,000 was paid in cash to a UBA account and the source of the funds was unknown.

“It is my view that the it is the pensioners funds that the defendant stole,” he said.

The term of imprisonment for the counts is not less than 2 years or not more than 3 years.

On Count 3, 7, 10, Maina was accused of taking about N1.5 billion from the accounts when he knew that they formed part of the proceeds of unlawful acts.

“Defendant is guilty and according convicted in count 3,7,10,” he said adding that jail term ranges from 7 to 14 years.

“In conclusion and the evidence left, it is my firm view that the prosecution has proved their case beyond reasonable doubt.