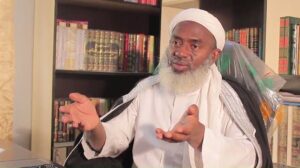 The Department of State Security Service (DSS) has invited controversial Islamic cleric Sheikh Abubakar Ahmed Gumi for questioning.
According to PeoplesGazette citing a report by VOA Hausa, the invitation came after a controversy between Gumi and the Nigerian Army.

The SSS spokesman Peter Afunanya is yet to respond to inquiry to confirm the arrest.

Recall that Gumi, during an interview with ARISE TV, accused the Nigerian military of aiding and abetting banditry in the North.

The Islamic cleric stated this while answering a question on the nationality of the bandits terrorising the North.

“These bandits are operating with a lot of criminal elements in our security system. Banditry is a business. How are the weapons being transported across the borders without any interception from security operatives? These weapons can’t come in without the knowledge of some people in the security system. There are people making money from this in the Military. The system needs a complete overhaul,” he said.

Reacting, the military said: “It is essential to remind ourselves that this same military, being accused of connivance, are the ones who recently put their lives on the line to rescue abductees of the Government Secondary School, Birnin Yauri from kidnappers.”

The statement added, “While the NA will not attempt to excuse the possibility of black sheep amongst its fold, it must be stated unambiguously that it will not condone any form of sabotage or aiding and assisting the enemy by any personnel.”

The army insisted that its soldiers always adhered to rules of engagement and protection of fundamental human rights.

Previous We Are Not After Northerners, IPOB Tells Gumi
Next JUST IN: Buhari Postpones London Medical Vacation