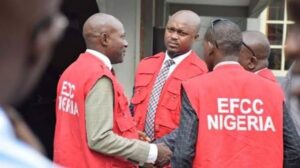 Speaker of the Ogun State House of Assembly, Olakunle Oluomo, has been arrested by the anti-graft agency, the Economic Financial Crimes Commission (EFCC), over allegations of offences bordering on financial crimes.
He was picked up this morning at the Murtala Mohammed Airport, Ikeja, Lagos, by operatives following a tip off.

At press time, he was undergoing further grilling in the custody of the agency.