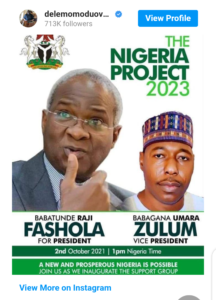 Society gazette reports that the race for who becomes the next president of Nigeria has taken a new turn as a former governor of Lagos state, Babatunde Raji Fashola has been picked by a group of people to succeed President Muhammadu Buhari.

YOU MAY ALSO LIKE:   Breaking: king Sunny Ade’s Wife And Ex-Lagos Lawmaker Risikat Adegeye Is Dead

The group, pushing the agenda ‘The Nigeria Project’ is set to launch officially on the 2nd of October, 2021 to further make its decision to pick Fashola known.

Also, the governor of Borno state, Prof Babagana has been picked as the preferred running mate of Fashola ahead of 2023.

This is coming after several individuals within the APC have shown interest in the coming election.

In addition, a flier has been going viral in the social media scene as shared below