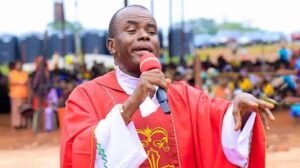 Fresh trouble has come for the Spiritual leader of the Adoration Ministry Enugu, Rev Father Ejike Mbaka as catholic banned clerics and faithful members from attending his ministry.
Naija News reports that Mbaka’s adversity started after the renowned cleric made a derogatory comment about Labour Party presidential candidate, Peter Obi.

Mbaka while addressing his congregants earlier on Wednesday, June 15, described Obi as a ‘stingy’ man who will never be the president of Nigeria.

YOU MAY ALSO LIKE:   CBA Foundation and Efforts to Decriminalise Widowhood in Nigeria

The cleric said Obi lacked the spirit of generosity, saying “It is better to have a president who is a gifted old man than a young man with ‘gum’ hands.”

His comment has since received a barrage of backlash from Nigerians across states. Though Mbaka has in a statement on Friday tendered an apology to the former Governor of Anambra State, more punishment has emerged for his consistent comments which are considered not in line with the Catholic teachings.