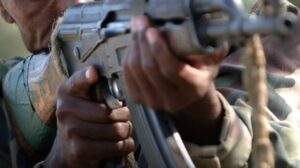 In what appears to be coordinated attacks on monarchs in Imo State, the traditional ruler of Atta Ancient Kingdom in Njaba local government area of, Edwin Ezike, has been killed by yet-to-be identified assailants.

Ezike’s murder was confirmed to THE WHISTLER by the Imo State police spokesperson, Michael Abattam, on Friday.

YOU MAY ALSO LIKE:   BREAKING: Former Nigerian leader, Ernest Shonekan is Dead

Abattam said the police were currently on the trail of the monarch’s killers.

This website gathered that Ezike’s body was dumped at the community’s market square on Friday after he was abducted on Thursday.

Meanwhile, the report of Ezike’s murder came about 24 hours after the traditional ruler of Mbutu Ancient Kingdom in Aboh Mbaise Local Government Area of the state, Damian Nwaigwe, was reportedly abducted by unknown gunmen.

The assailants numbering about ten were said to have stormed Nwaigwe’s palace at about 2:30 am on Thursday and whisked him away.

Abattam had also confirmed Nwaigwe’s abduction but assured that the police were doing everything possible to rescue him.

THE WHISTLER recalls that two traditional rulers were shot dead in Njaba LGA of the state in October.

YOU MAY ALSO LIKE:   RAHFA 2022: ENCOMIUMS AS TRIXX NG PUBLISHER, OSHO OLUWATOSIN BAGS ANOTHER PRESTIGIOUS AWARD