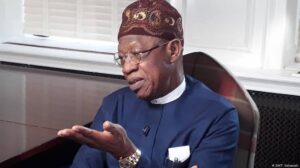 Nigeria’s minister of Information, Lai Mohammed has denied meeting Twitter Executives in the United States in order to settle differences with regard to the social media giant’s suspension in the country.

It can be recalled that the Nigerian Government suspended Twitter’s operations in Nigeria some months ago after a tweet citing genocidal violence was removed from President Buhari’s account on the platform.

Speaking on the rumoured meeting, Mohammed revealed that he was in the U.S. to meet with international media organisations and think tanks on the achievements of President Muhammadu Buhari’s administration.

“Can a minister sneak out of Nigeria without people knowing?”

“When you say I sneaked out of Nigeria, are you saying I went to board at a terminal where nobody is or I travel to the Republic of Benin to fly out of the country?”

“I was at an international airport, where I presented myself openly and I was checked in at the counter like every other traveller of the airline. I boarded and passed through the checks by the Immigration Service and Customs.”

“How can you come and say I sneaked out of the country?’’.

YOU MAY ALSO LIKE:   Wizkid Replies Seun Kuti After He Told Him To Stop Parading Himself As A Grammy Nominee

He said he had no mission with Twitter on his trip.

“You and I have been here, have I met with any Twitter official­?”, he asked.