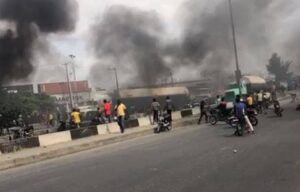 One policeman has been confirmed dead and several wounded.

It was gathered that Task Force officers seized bikes and it turned violent.