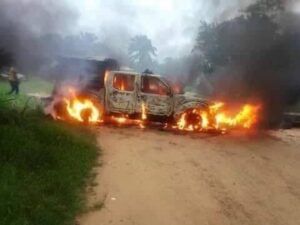 It was gathered that the gunmen also razed Ika police station.

During the two attacks, different facilities, vehicles, and other valuables were destroyed by the gunmen.

The incident comes four days after six persons — five officers and the wife of a policeman were killed following an attack on the divisional headquarters in the Ini Local Government Area of Akwa Ibom state.

YOU MAY ALSO LIKE:   FIRSTBANK PROMOTES DIASPORA REMITANCES, REWARDS CUSTOMERS WITH EXTRA N5 FOR EVERY DOLLAR RECEIVED

During the attack which took place on Saturday, vehicles were also set ablaze.

Police facilities in at least five LGAs – Essien Udim, Ika, Ini, Ikono, and now Abak – have been attacked so far in the state.

There has been a spate of attacks on security agencies in the South-East and South-South geopolitical zones, which has compounded the security challenges in the two regions.

YOU MAY ALSO LIKE:   ‘I Stand Firmly behind my decision’, Biden defends U.S. Decision To Pull Out of Afghanistan
BREAKING: Two Feared Dead As Unknown Gunmen Attack Two Police Stations In Akwa Ibom 2021-05-12
Oluwasegun Adesuyi
Share