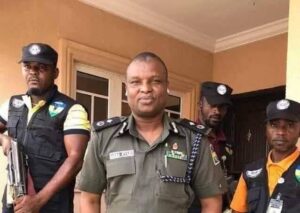 Embattled police cop, Abba Kyari’s woes are far from over as the United State Government has gathered over 6,700 pages of documentary evidence and 2,700 electronic files from trial in a $1.1 million fraud case involving him and disgraced fraudster, Ramon Olorunwa Abass a.k.a Hushpuppi.

It can be recalled that Kyari entered hot water earlier this year after he was indicted by the Federal Bureau of Investigation, FBI over his role in a massive $1.1 million fraud carried out on a Qatari businessman by Hushpuppi and a few others.

According to Premium Times, US prosecutors are currently scouring through investigative reports and “new discoveries” including documents obtained from foreign law enforcement. Prosecutors have asked the U.S. District Court for Central California to postpone trial from October 2021 to 17 May, 2022.

The parties jointly filed the application on Friday, citing various reasons for asking for trial postponement.

Apart from the need for additional time by the defence lawyers to prepare for the case, U.S. prosecutors also asked for more time to process troves of documents, including those obtained from foreign countries.

According to the application, the U.S. government has already handed to the defence approximately 2.31 GB of data consisting of 2,707 electronic files. The files contain, among others, exported chat logs, Cellebrite reports, WhatApp messages, audio recordings, etc.

It added that prosecutors were processing approximately 6,773 pages of additional discovery expected to be produced in two weeks’ time.

YOU MAY ALSO LIKE:   Youths Beat Bandits’ Informant, Family Members To Death In Kaduna

“The government has produced discovery to the defense, including approximately 2.31 GB of native data consisting of 2,707 files including exported chat logs, Cellebrite reports, WhatApp messages, audio recordings, and other social media content.”

“The government is currently processing approximately 6,773 pages of additional discovery including investigative reports and documents received from foreign law enforcement agencies for production and anticipates those materials will be produced within approximately two weeks,” the document reads, in part.

Three ready for trial in May, Abba Kyari, two others ‘at large’