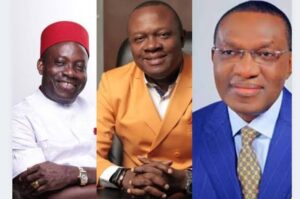 Soludo, Ubah and the candidate of the Peoples Democratic Party, Valentine Ozigbo debated live on Arise Television on Monday afternoon.

YOU MAY ALSO LIKE:   'Light At The End Of The Toilet' - Senator Ali Ndume Commits Blunder (Video)

POLITICS NIGERIA gathered that while fielding a question on Education, Soludo stated that Ubah had no school certificate adding that he forged his. He went ahead to query Ubah who replied that he possesses a certificate and finished secondary school in 1974.

The exchange became heated with Ubah saying that Soludo did nothing as the governor of the central bank of Nigeria adding that he was the one who made the popular banker attain the position.