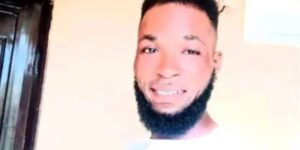 According to Daily Trust, the 36-year-old who hails from Iwoye-Ketu in Ogun State lives in Ekiti with his wife and two children.

Akeju’s elder brother, Muideen told the publication that he informed his family when he arrived at the Alfa’s residence on March 25 with the intention of returning home the same day. However, not only did the father of two refuse to return home that same day, he became unreachable on phone for hours which later rolled into days and weeks.

According to the elder brother: “When we contacted alfa to ask about our brother’s whereabouts, we were surprised to hear him say that our brother did not come to his house. The matter was immediately reported to the police at Iyara Division.”

Muideeen explained further that when the police stormed the cleric’s residence he had taken to his heels but his father was apprehended. The suspect was later arrested and the bricklayer’s mobile phone was found on him. However, the suspect denied knowing the bricklayer’s whereabouts.

The family’s lawyer, Amos Oghinan, said that the suspect had been transferred to the state headquarters in Lokoja, saying the suspect remained adamant.

Oghinan complained about the delay in charging the suspect to court.

He said: “Already, the alfa is overstaying his visit to the police headquarters, any human rights organization can complain about unlawful and long detention. To avoid this, the police should charge the case to court.”

YOU MAY ALSO LIKE:   TROOPS DISLODGE IPOB/ESN STRONGHOLD AT LILU FOREST IN ANAMBRA STATE

The state police spokesman, William Aya, said he had not been briefed on the matter.