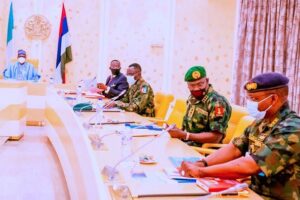 President Muhamadu Buhari is currently meeting with Service chiefs and heads of security agencies over the worsening insecurity in the country.
Naija News reports that the National Security Council Meeting is taking place at the Council Chambers of the Presidential Villa, Abuja.

Others at the meeting are the Secretary to the Government of the Federation; Boss Mustapha; the Chief of Staff to the President, Professor Ibrahim Gambari and the National Security Adviser (NSA), Major General Babagana Monguno (retd).