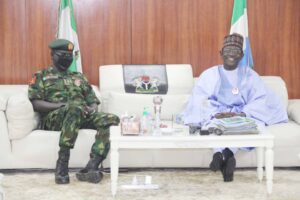 As the year comes to an end, Lieutenant General Tukur Buratai, Chief of Army Staff has met the executive Governor of Yobe Mai Mala Buni, on Wednesday, December 23, on a strategic engagement in securing Yobe State during and after yuletide.

Briefing the governor, General Buratai explained some of the military strategic efforts deployed at curtailing the activities of criminals and insurgents in Yobe State and other parts of north eastern Nigeria.

National Association of Online Security Reporters, NAOSRE, gathered that during the meeting which held at the Damaturu Government House, General Buratai specifically assured the governor of drastic security measures embarked upon by the Nigerian Army in the North East

The Chief of Army Staff further assured the government and people of Yobe State that the Nigerian Army is taking drastic steps to ensure that Damaturu-Maiduguri roads are secured to safeguard lives and properties of the people.

He stated that the army in partnership with other relevant stakeholders will have strategic engagements in the next few weeks to further improve security in the zone particularly in identified flash points.

He attributed the relative peace been enjoyed in the state and the region to the commitment of the Nigerian Army and other security agencies.