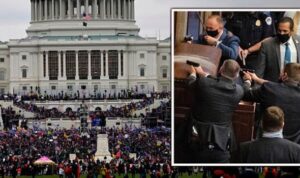 It was dark. The place was crowded. The protesters buoyed by promise of international fake media support were unyielding to entreaties by security personnel. In a show of high level professionalism, tactical patience and courageous restraint, the soldiers armed with both lethal and non lethal weapons, carefully and methodically applied just the necessary and reasonable minimum force to disperse the arsonists protesters. At the end of this demonstration of the acme of military professionalism, not a single protester was killed, a few maybe bruised , a few broken legs due to stampedes…Dazzol!

YOU MAY ALSO LIKE:   Heritage Bank joins WHO to advocate elimination of Malaria endemic by 2030

Elsewhere in the United States of A, @Capitol Hill, a group of Lekki-like protesters descended. Similarly carrying national flags. The security agencies responded, meeting the anarchists with a mix of both lethal and non lethal weapons. The American protesters were not as lucky as their Nigerian counterparts as four people were reportedly shot.

I pause here to ask: Should we not salute the Nigerian military that conducted the Lekki operation for a job well done, for showing the acme of professional skills, tactical patience, courageous restraint in the face of high provocation???
If I spoke your mind, please give your salute here to the Nigerian military.

It would be recalled that In an “unprecedented assault” on democracy in America, thousands of angry supporters of President Donald Trump stormed the US Capitol yesterday and clashed with police, resulting in casualty and multiple injuries and interrupting a constitutional process to affirm Joe Biden’s victory in the presidential election.

The police, outnumbered by the maskless protesters, had a tough time in managing the mob, as hundreds of protesters breached security and entered the Capitol building on Wednesday, where members of the Congress were going through the process of counting and certifying the Electoral College votes. Both the House and Senate and the entire Capitol were placed under a lockdown.

Vice President Mike Pence and lawmakers were evacuated to safe locations. One woman who was shot inside the US Capitol has died, CNN reported, quoting a spokesperson with the Metropolitan Police Department. Multiple officers were injured during the mob attack.

YOU MAY ALSO LIKE:   APC Govs Back Buhari’s Candidate, Abdullahi Adamu As Consensus Chairman

Of a truth, with the recent happening in America which is regarded as the reference point for democracy, the Nigerian army should be celebrated and not vilified for preserving our democracy. No sane security agency in a sane government will look on while anarchy descends on the nation.