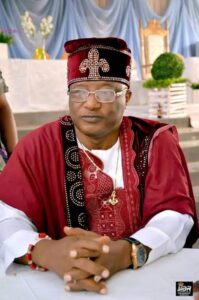 The owner of Hilton hotel, Prince Ramon Adedoyin has been further indicted in the circumstances that led to the death of Timothy Adegoke, a masters student of OAU who died at the hotel some months ago.

He was said to have been gruesomely murdered and buried by staffers of Hilton hotels. The police also confirmed that he was buried without the consent of his family members or the police force.

YOU MAY ALSO LIKE:   $11m Fraud Allegation: Obinwanne (Invictus) Okeke Pleads not Guilty, Remanded in Prison till February 2020

This made the matter complex and led to the arrest of Ramon Adedoyin as investigations began into the sudden death of the young man.

In the course of investigation, the police revealed that Ramon Adedoyin’s son monitored the burial of Timothy Adegoke and that since the matter happened, he has been on the run.

In a new twist today, a human right activist who has been making revelations about the case, simply called Hamzat spoke this evening and made it known that the CCTV has been released and Ramon Adedoyin was confirmed to be part of the people that carried out the act.