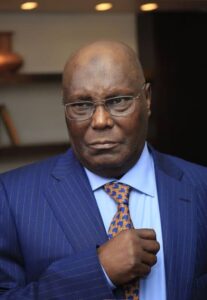 The 2023 Presidential Candidate of the Peoples Democratic Party, PDP, Atiku Abubakar is mired in a fresh Certificate controversy following a discovery that his WAEC certificate bears a different name.

According to documents displayed by the Independent National Electoral Commission (INEC), Atiku did not provide information on his primary education. The 1965 West Africa School Certificate (WASC) result presented by him identified the student as ‘Siddiq Abubakar’.

Attached to the documents was a sworn affidavit as Deputy Preventive Superintendent attached to Customs Preventive Station, Apapa Wharf, Lagos, where he declared to be addressed as Atiku Abubakar.

Reacting, a public affairs analyst said it was baffling and shocking that Atiku earned a Master’s degree in 2021 with GCE 0 level results.

“I would like to know how Atiku with zero academic or creative publications and with zero college level courses suddenly earned a Master’s degree? And the year 2021 is suspect. He quickly scammed Nigeria with a degree he obtained in 2021 because of the presidential election.

“Before someone without a Bachelor degree could earn a Master’s degree, he must have distinguished himself academically or in his field of endeavours by showing publications or unique writing samples.

“For example, a playwright called Nilo Cruz (Cuban-American playwright) was accepted into Brown University MFA in playwriting program in the early 1990s without a bachelor’s degree. But he earned Associate degree from Community College and distinguished himself as a talented playwright with numerous plays.

“And he was recommended into Brown MFA In playwriting program by another scholar/ playwright who had taught Nilo Cruz before.”.