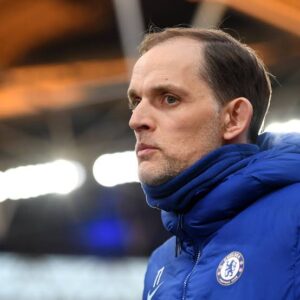 Chelsea manager, Thomas Tuchel, has lamented the current situation with the club, expressing doubt about his team winning the 2021/22 English Premier League title.

Tuchel’s submission is coming after Chelsea were held to a 1-1 draw by Brighton on Wednesday night at Stamford Bridge.

The Blues have played 20 games in the ongoing campaign and currently sit in second place with 42 points, a point ahead of Liverpool which has a game in hand.

Thomas Tuchel’s side has been affected by a series of injuries and some of the player’s including a coach is currently infected with COVID-19 disease.

According to the Blues manager, it will be ‘stupid’ to think they (Chelsea) are in the Premier League title race.

Asked if Chelsea can still compete for the title, the German coach replied: “How should we be in it? We have seven Covid-19 cases. We have five or six players out for six or more weeks. How should we compete in a title race?

Meanwhile, Manchester City manager, Pep Guardiola has admitted that his side is going to lose more games before the end of the 2021/22 English Premier League campaign.

YOU MAY ALSO LIKE:   Ondo: Akeredolu Appoints Son As Head Of Agency

The Spanish professional football coach who spoke in a post-match interview after City’s Premier League 1-0 victory over Brentford on Wednesday night, said he is afraid the likes of Liverpool, Chelsea and Arsenal may close up with points in no distance time.

YOU MAY ALSO LIKE:   EFCC Arrests Socialite Obi Cubana

Asked whether Manchester City were in control of the ongoing EPL campaign, Guardiola told Amazon Prime that, “There are 54 points to play for. It is not expected to have this distance for eight and nine, but Liverpool play one game less.

“But it is 54 points. In December, no one is champion. We are going to lose games. I see in my mind Arsenal, Chelsea, Southampton coming.

YOU MAY ALSO LIKE:   See What Igbo Leaders Demanded From Buhari During Imo Meeting

He added, “We have a game in London against Arsenal, maybe one of the top teams right now, the best Arsenal in the last four or five years.

“I cannot say more than congratulations to the team, but we must focus.”