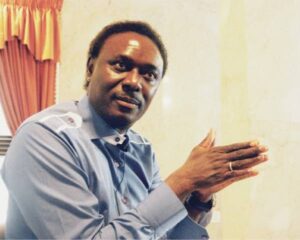 The Senior Pastor of the Household of God Church, Chris Okotie, has disclosed the reason he failed three times to become president despite claiming to have heard the directive from God to run for office.
The clergyman explained during an interview with Arise TV on Thursday that failing to win the presidential elections three times do not invalidate the prophecy that he would lead the country.

It would be recalled that Okotie contested the presidency in 2003, 2007, and 2011 but lost all the elections, thereby steering debates about the genuineness of his ministry.

Okotie also noted that God’s prophecies are futuristic and could take years to materialize.

“The thing about this is that it is difficult to communicate spiritual realities to a mind that is not renewed. The language of faith is totally different from that which we have in ordinary parlance,” he said.

“When God speaks to you, he doesn’t speak futuristically, he speaks in the present. God always says I have made you. He told Abraham ‘I have made you the father of nations’ when he didn’t even have a child. So, sometimes when we communicate spiritual information, people misunderstand. Because faith is beyond that which is cognitive.

“So, when I make a statement and when people think ‘Oh, well he didn’t win an election’ and they think that it is immediate.”

God’s Prophecies About Moses And Abraham Took Time To Come To Pass
Okotie referred to instances in the Bible where God made promises to Moses and Abraham and it took years before it came to fruition.

He said: “When the Lord sent Moses to Pharaoh, it took several times of going to Pharaoh before Pharaoh capitulated. When the Lord says he’s going to do something, he says it now but it takes time. It took time for Abraham to beget Isaac. So, we need to understand that it took time for the prophecy concerning the rainfall to take place when Noah started telling the people it was going to rain. It took 100 years before it began to rain and the people thought he was crazy. So, many times when we talk about faith, the unbeliever or infidel who doesn’t understand spiritual things runs into a place of confusion.

YOU MAY ALSO LIKE:   APC postpones Anambra campaign in honour of Akunyili, others

“But I can assure you that that which has been spoken will definitely come to pass. What I am doing right now is patriotic. I’m trying to evoke nationalistic sentiments at a time when Nigerians need to come together in a cohesive atmosphere where there is love, understanding, and unity. And we have that nationalistic brotherhood that could help us overcome the situation that we face today.”