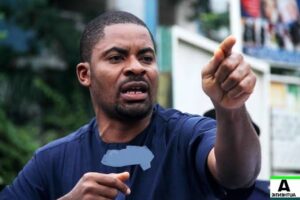 The convener of the Concerned Nigerians movement, Deji Adeyanju, has condemned the Special Adviser on Drainage and Water Resources to the Lagos State Governor, Babajide Sanwo-Olu, Joe Igbokwe.
The activist charged the APC chieftain to clean smelly gutters in Lagos State rather than make noise on social media.

YOU MAY ALSO LIKE:   Victoria Aguiyi-Ironsi, Former Nigerian First Lady Is Dead

Recall that Igbokwe recently celebrated the rearrest of Nnamdi Kanu, leader of the Indigenous People of Biafra, IPOB.

According to Igbokwe, the IPOB leader once asked IPOB members to kill him and his family members.

He added that President Muhammadu Buhari-led government has enough evidence to convict the embattled IPOB leader.

Adeyanju in a tweet wrote: “Joe Igbokwe who should be busy cleaning smelly gutters in Lagos is still on Facebook making noise.”

Previous After Cubana’s ‘burial of the year’, youths bombard Edochie for help on money ritual
Next BBNaija: Organisers Announces Official Date For Season 6