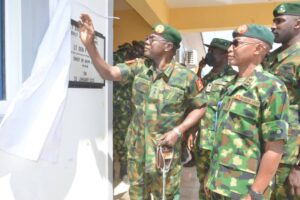 Speaking during the commissioning, General Yahaya averred that RSMs are very vital in the management of soldiers and play the crucial role of inculcating discipline, as well as promoting ethos, traditions and doctrinal values of the Nigerian Army, amongst personnel in formations and units. He acknowledged that service discipline and experiential knowledge imbibed from RSMs by soldiers, build the foundation of trust and confidence, which enhance stability of formations and units across the Nigerian Army.

YOU MAY ALSO LIKE:   Breaking! Chelsea Sacks Coach Lampard to announce Tuchel later

The COAS maintained, that commissioning of the buildings is part of his welfare agenda for the RSMs, aimed at restoring the prestige of the office. He later handed over keys of the building to Army Warrant Officer(AWO) Adams Bamidele, the RSM of 1 Division, Nigerian Army.

It will be recalled, that since assumption of office, the COAS has through his Command policies and administration, been boosting troops’ morale and reinvigorating their fighting will, with the prompt implementation of welfare policies and dispensation of welfare packages, such as the introduction of welfare flights for troops and their families, in and out of Operational theatres, construction of new accommodation quarters and renovation of dilapidated ones, to solve personnel’s accommodation challenges and sponsoring of Wounded in Action officers and soldiers for treatment overseas. He has also presented Hilux vehicles to serving and retired RSMs to restore the dignity associated with the office and empower them to effectively carry out their duties.