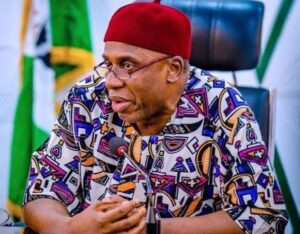 The Minister of Transportation, Rotimi Amaechi, has guaranteed Nigerian movie makers free use of trains to shoot their films across the country.
This is as the minister boasts about the exceptional infrastructure development going on under the administration of President Muhammadu Buhari, which according to him should be showcased to the world.

Amaechi said, “We have to do this because what the president is doing in infrastructure should be shown to the world.

“The president has improved on infrastructure and railway is one of them. We have to grant them that approval of using the train. So that the world we know that we are delivering on our campaign promises.”

Speaking in Abuja yesterday while playing host to the Chief Executive of Native Media, Mr Rogers Ofime and his crew members on a thank-you visit, Amaechi reiterated his resolve to always support movie makers when they needed train service for their shootings.

He advised film producers to strive for quality that would make them compete favourable internationally and boost the nation’s economy.

The Minister pledged support for the shooting of ‘Conversations in Transit’, a contemporary gritty romantic comedy and other movies.

This according to his would promote the good image of the country under the incumbent government.

The minister said that approving the train services for movie producers to use for shooting at no cost was the government contribution to boost the sector.

Amaechi added, “We will continue to improve our infrastructure to make the society grow. Road and railways deal with issues of logistics, even if you manufacture you need better infrastructure.

“The film project is a beautiful idea; it will engage the people meaningfully, provide entertainment and grow the economy.

“We are happy they are doing it and that is why we will be willing to always grant them the approval of the train anytime they wish to use it.”

Amaechi encouraged the filmmakers to strive to become the best in the world, noting, however, that improving to become the world best is not rocket science.

YOU MAY ALSO LIKE:   Ecobank is the “Go to” Bank for Regional Trade in Africa – Akinwuntan

On his part, Ofime thanked Amaechi for approving free train services for the shooting of the film, Conversations in Transit.

Ofime said that the production of the film was informed by his experience of ta rain ride from Lagos to Ibadan, which he described as fascinating.

He said, “When I came to Nigeria from Canada, what fascinated me was the train ride from Lagos to Ibadan and that informed the project I am doing.

“One is to showcase the achievement of the administration and also to let people know of another means of transportation which is very wonderful.

”People have been taking the train ride and the feedback has been really great.”