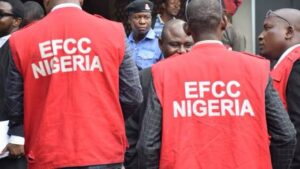 The Economic and Financial Crimes Commission (EFCC), has said more than 70 per cent of Nigerian youth might soon become ex-convicts if the present high rate of their involvement in cybercrime was not stopped.

This is as the Benin Zonal Command of the agency, yesterday, secured the conviction of three cyber criminals before Justice A. T. Mohammed of the Federal High Court sitting Port Harcourt, Rivers State, bringing to 33 the number of internet fraud convictions recorded by the zone within 24 hours.

The Ilorin zonal commander of the EFCC, Mr. Usman Muktar, while speaking with journalists on the state of the nation, decried the high rate of cybercrime among youths and enjoined every stakeholder in the country to discourage the youths from internet fraud.

Muktar, who said the EFCC had witnessed an increasing number of arrest of Nigerian youths in cybercrime in recent time, charged parents to ask their children questions about sources of their wealth.

“When your children, who are in schools stopped asking you for money for upkeep or driving expensive cars, parents should ask questions. Unfortunately, some parents support these youth in internet fraud. They say it’s oyinbo money. How does that turn to be your money?”, he asked.

He lamented that free money from cybercrimes led to the use and sales of hard drugs and drug abuse, saying all hands must be on deck to save the situation.

Muktar added: “Corruption among elected political office holders is also a cause for concern. People should ask questions about projects and quality of work/projects. It would make them sit up. Such programmes like TV/radio documentaries, write ups, whistle blowing etc should be encouraged as we call on media to join in the anti-corruption fight.”

The commander warned fraudsters to desist from engaging in acts of corruption and steer clear of the three states under his command, saying, the “eagle eyes” of the Commission was widely open and ready to catch any corrupt individual, anytime, anywhere.

YOU MAY ALSO LIKE:   NURTW Crisis: Lagos Assembly States Position

He described the media as a crucial partner in preventing corruption, economic and financial crimes in Nigeria.

“The task of fighting economic and financial crimes is painstaking and broad-based and should be embraced by all strata of the society with the media serving as channel of communication and enlightenment.

“Commission depends greatly on the media to achieve success in the anti-graft campaign, especially, as it affects the prevention mandate, which is hinged on Section 6 of the EFCC Establishment Act.

“Without a doubt, the media is a critical stakeholder in the anti-graft war. With your pen, you could make or mar the fight against corruption. The media’s potential to inform and educate the people is crucial for us.

“We believe that on our own, we cannot win the war against corruption without a buy-in by the people. This is where the support of the media comes in. We need the media to help sensitise the people on the ills of corruption and economic crimes”.

Still on cybercrime, the Zonal Commander stated that, “The Command, which covers Kwara, Ekiti and Kogi States is engaging relevant stakeholders including religious and traditional leaders, Civil Society Organisations, CSOs and the youths with a view to sensitising them on the inherent dangers of corruption. My Command is certainly not going to be a safe haven for cyber criminals,” he added.

The convicted internet fraudsters were arraigned separately on one count charge bordering on impersonation and obtaining by false pretences.

YOU MAY ALSO LIKE:   Pastor's Sack: Winners' Chapel Is Right - Reno Omokri

The charge against one of them read: “That you Adebuje Isaac Oluwadunsin on the 5th day of August, 2021 at Ondo State within the jurisdiction of this Honourable Court did fraudulently impersonate the identity of one Michelle Orton a white woman and citizen of the United States of America in your Samsung S8 and email address [email protected] to gain advantage for yourself and you thereby committed an offence contrary to Section 22(2)(b)(i) and (ii) of the Cybercrimes (Prohibition, Prevention, etc) Act 2015 and punishable under Section 22(2)(iv) of the same Act.”

Three sureties who were arraigned for perversion of justice were Lewis Ogenkhene, Ughoshe Adolphus and Osazuwa Efosa Robertson.

The charge against Ogenkhene read: “That you Lewis Ogenkhene (m) on or about the 15th day of September, 2020 in Benin City, Edo State within the jurisdiction of the Federal High Court did knowingly make a false statement to Detective Ajisafe Wasiu, an officer of the Economic and Financial Crimes Commission in the course of the exercise of the duties of his office, which statement is untrue in any material particular and thereby committed an offence contrary to Section 39(2)(a) of the Economic and Financial Crimes Commission (Establishment) Act 2004 and punishable under Section 39(2)(b)of the same Act.”

All the defendants pleaded guilty to the charges, when they were read to them.

The prosecution counsel, Francis Jirbo, Austin Ozigbu and Ibrahim Mohammed, prayed the court to convict and sentence the defendants accordingly.

Adeboyega Muritala Idowu was discovered to have falsely presented himself as Bendik Phillip, John Micepl to defraud an American citizen of $19,650.

The charge against Idowu read: “that you Adeboyega Muritala Idowu, aka Bendik Phillips, (John Micepl ) between 2019 and 2021 at Alagbaka area of Ondo State within the jurisdiction of this Honourable Court did with intent to defraud, send messages which materially represented your identity to Mellisa, an American lady upon which she relied and suffered financial loss in the sum of $19, 650 (Nineteen Thousand, Six Hundred and Fifty Dollars) and thereby committed an offence contrary to Section 22(2)(b)(i) and (ii) of the Cybercrimes (Prohibition, Prevention, etc) Act 2015 and punishable under Section 22(2)(iv) of the same Act.”

The defendants pleaded guilty to the charge.

In view of their plea, prosecution counsel, Francis Jibro prayed the court to convict and sentence them accordingly.

Justice Mohammed convicted and sentenced Idowu to five years imprisonment or a fine of N300, 000. The duo of Benjamin and Olawale bagged two years term with the option fine of N200, 000 each.

The court also ordered the forfeiture of the sum of N6.4 million recovered from the bank account of Adeboyega Muritala Idowu to the Federal Government of Nigeria.