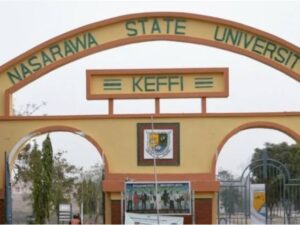 The school management had notified the personalities in letters ahead of the event.

Other recipients of the awards were Chief Peter Eloka Okocha, the Chief Executive Officer of Okocha Motors; Alhaji Aliyu Balarabe, businessman and the Attorney General of the Federation and Minister of Justice, Abubakar Malami SAN.

Naija News reports that the ceremony which received the presence of dignitaries was held at the Convocation Centre of the institution.

Meanwhile, the Senior Staff Association of Nigerian Universities and the Non-Academic Staff Union of Education and Associated Institutions have announced that they will be embarking on a strike.

Naija News reports that the two-week warning strike action according to the association, will commence on March 27.

This was made known in a letter titled “Commencement of Two-Week Warning Strike”, released last week Friday by the Joint Action Committee of NASU and SSANU and signed by SSANU President, Mohammed Ibrahim, and NASU General Secretary, Peters Adeyemi.

YOU MAY ALSO LIKE:   JUST IN: Sheikh Habeeb Al-Ilory suffers stroke, slumps during sermon in Ilorin

The national bodies of SSANU and NASU asked its members in universities and inter-university centres to begin the warning strike.

Previous Jonathan Rejects Presidency Conditions For Getting APC Presidential Ticket – Source
Next 2023 Presidency: Obasanjo Reveals The Type Of Candidates Nigerians Must Not Vote For