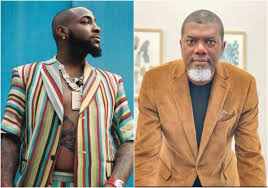 Former Presidential aide, Reno Omokri has praised talented Nigerian singer, Davido for donating the sum of two hundred and fifty million naira to orphanages across the country.
Davido took this decision after he hit more than two hundred million naira in donations in two days from his friends to clear his Rolls Royce from the port.

Reno in his reaction said Davido is much wiser than those who gave him monies, stressing that he understands the spiritual realm and the ways of God.

YOU MAY ALSO LIKE:   Pastor Kumuyi Makes Pledge To Politicians ahead of 2023 election

The former presidential aide also commended the singer for having a heart of Gold.

He wrote, “Davido is much wiser tha those who gave him monies. He understands the spiritual realm and the ways of God. He has secured a soft spot in the Heart of God by virtue of James 1:27. I commend him. What a heart of Gold. Those who gave to him should read Proverbs 22:16

“Those saying Davido donated the money as an afterthought are pathetic. Look at the calibre of people on the committee to disburse the funds. It would‘ve taken days, if not weeks to contact them and get their buy in. This was a carefully thought out act of goodness.”