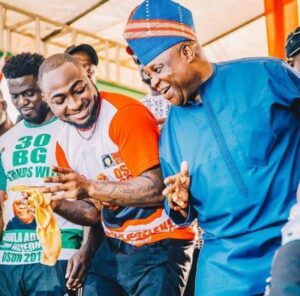 In a video shared online, the DMW boss is seen touring the state in a carnival-like manner while receiving cheers and applause from supporters.

Davido’s visit comes a day before the PDP mega rally in the state to drum support for Adeleke. Atiku Abubakar, PDP presidential candidate, and state governors elected under the party’s platform are expected to be in attendance.

In a related development, popular singer Portable has declared support for Gboyega Oyetola, governorship candidate of the All-Progressives Congress (APC).

The Zazu crooner in a video posted on his Instagram page on Wednesday urged his fans in Osun to vote for the governor, who was sitting beside him.

Despite the presence of other candidates, the Osun governorship election is expected to be a two-horse race between the current governor, Gboyega Oyetola of the ruling APC, and Senator Ademola Adeleke of the PDP.

Coincidentally, both men battled it out in 2018 with Oyetola narrowly emerging victorious after a controversial re-run.

YOU MAY ALSO LIKE:   Leaked Audio: How We Used Igboho’s Weaknesses To Attack His Residence – Unknown DSS Official