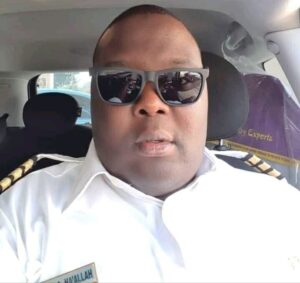 The Kaduna State Government has described the death of pilot Abdulkarim Na’Allah as “appearing to be a case of culpable homicide”.

Mr Samuel Aruwan, Commissioner for Internal Security and Home Affairs, stated this on Sunday in Kaduna.

Aruwan said the state government has been informed by security agencies that the remains of aircraft Capt. Ibn Na’Allah were found in his Kaduna home.

“In what appears to be a case of culpable homicide, the deceased was found in a bedroom in his residence in Malali, Kaduna North LGA, apparently after having been strangled with a rope.

“A vehicle was stolen from his parking lot by the assailants,’’ he statement said.

The remains of the pilot were buried on Sunday evening at Unguwan Sarki Cemetery, Kaduna.

Aruwan said that in another incident bandits killed one person at Janwuriya, Kajuru Local Government Area of the state.

He said Gov. Nasir El-Rufai expressed deep sadness at the incidents as he prayed for the repose of the souls of the victims.

YOU MAY ALSO LIKE:   Marwa Vows To Dismantle Drug Cartel As NDLEA Operatives Recover 137.55kg Of Cocaine In Ondo, Nasarawa, Benue Raid

The governor urged security agencies to conduct vigorous investigations into the incidents and apprehend the perpetrators of the attacks.

“I have directed that a full scale investigation be carried out with a view to unraveling the identities of the culprits and bringing them to book,“ the CP was quoted as saying in the statement.

YOU MAY ALSO LIKE:   Panic in Imo As Army Begins Seven-Day Show-Of-Force To Nab IPOB, ESN Operatives

Son of Adamawa Sen. Bala Ibn Na-Allah, the 36-year-old aircraft captain was allegedly murdered in his Kaduna residence on Aug. 29.

“The report has it that the assassins forcefully gained access into the residence of the pilot at Umar Gwandu Road, Malali, Kaduna during the night hours, choked him to dead in cold blood and made away with his Lexus SUV to an unknown destination,“ the CP said in the statement.

Previous 2023: Nigerians Have Been Deprived Dividends Of Democracy, PDP Remains The Only Hope For Them – Tambuwal
Next Breaking: President Sacks Service Chiefs, Names New Commanders