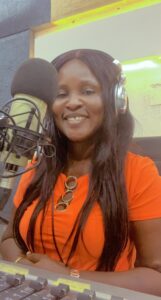 Heraclitus states “The only constant thing in life is change”. It is in fact the reason the teaming fans of delectable On Air Personality (AOP) and standout Yoruba radio presenter Jumobi Omisore popularly known for her Awoko Pade Ega program on Radio Lagos can now listen to her on Dux 94.7 FM.

The new radio station which was recently established by serial businessman Asiwaju Rotimi Ajanaku, and operating from Arepo axis of Lagos-Ibadan Express has one of Nigeria’s most sought after brain in media industry in Otunba Femi Davies as the Director of Operation, while accomplished broadcaster, Olusola Ajala is the General Manager.

Jumobi Omisore’s switch to Dux is strategic as it give her more time on air as she will feature more prominently because she will be handling more programs across the week. She will be handling though provoking and interesting programs like; ‘Oju Mi To’ every Tuesday by 10:30pm to 11pm, ‘Arinye’ every Monday from 3 to 4pm, her Muslim fans will also enjoy her every Friday between 5 and 6 am on ‘Barka Jimoh’ as well as on ‘Nuru Salam’ by 12:10pm to 1pm all Fridays.

YOU MAY ALSO LIKE:   Fuji music icon, K1 The Ultimate Loses Father

She will also be on air every Friday night by 8:30pm through 9pm for ‘Jimoh Oloyin’, on Thursday she will be on air from 11pm in the night till 2am in the early morning of Fridays for ‘Jelenke’, while Jumobi will be on air every Saturday to present ‘Idile  Alayo’ a program planned to help strengthen the family.

YOU MAY ALSO LIKE:   “We Are Probing A Possible Hacking Of Queen Naomi’s IG Page” – Ooni Of Ife Media Director

Against the backdrop that she has completely quit the industry, Jumobi will want her fans to know she only left for more opportunities to serve them better, she’s however now available for live interaction with them on her new Instagram handle  @jumobiomisoreduxfm, with more programs she promise to always continue to meet the needs of her teaming fan.