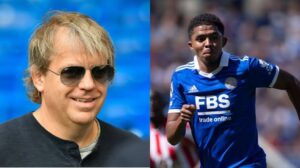 English Premier League club, Chelsea have completed the signing of Wesley Fofana from Leicester City.
Chelsea confirmed the signing of the 21-year-old player today on its official website and social media platforms

The Blues have won only two out of five matches in the ongoing campaign. They lost a match and drew one, relaxing presently with seven points on the league table.

Though Chelsea had strengthened the defensive line ahead of the 2022/23 season following the arrivals of Kalidou Koulibaly and Marc Cucurella earlier in the summer, adding Fofana to the list will be a great plus.

Fofana reportedly penned a seven-year deal with the Blues. His contract will last through 2029.

On completing his signing, Fofana said: “The two last days have been really big days for me and I’m very happy. I trained this morning with the team and it’s a dream for me. I’m very excited to start playing games for the fans and the club.

YOU MAY ALSO LIKE:   FIRSTBANK FELICITATES WITH JUNIOR ACHIEVEMENT NIGERIA ON NOBEL PEACE PRIZE NOMINATION

The young star has had an impressive performance for his home national team, France.

Fofana enjoyed two seasons at Leicester and was considered one of the best young players in the English league.