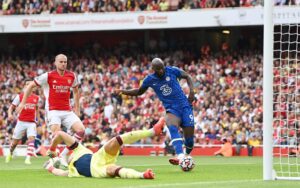 This was men against boys which, given Romelu Lukaku first arrived at Chelsea as a raw teenager 10 years ago and returns as one of the world’s finest strikers, was accurate in more ways than one.

Chelsea were simply too good for Arsenal who have now played two, lost two and have not even scored. Chelsea were too good, too strong, too skilful, too well-organised, too competitive. The differences went on and on.

Lukaku got his goal inside 15 minutes, having not scored in 15 appearances for Chelsea during his first spell at the club and the strike summed this match up. The difference he made to Chelsea – who are bona fide, genuine Premier League title contenders, and the difference between them and Arsenal.

Following his £97.5million move from Inter Milan and on his return to the west Londoners Lukaku did precisely what Chelsea want. As the away fans chanted his name at a corner Lukaku tapped the club badge on his shirt. This appears set to be a very happy reunion.

For his goal the 28 year old held the ball up against Pablo Mari, like he was fending off an over-eager puppy, and released it back to Mateo Kovavic who picked out Reece James unmarked on the right. The wing-back’s low cross was precise and for all of Mari’s efforts to try and impede him Lukaku was in the six-yard area to tuck it into the net. Mari ended up on the ground having thrown his arms in the air. It was not a good look for Arsenal although it was a textbook example of what Chelsea hoped for from Lukaku.

It was his first ever goal against Arsenal and was also his 114th in the Premier League – taking him ahead of Ian Wright in the all-time list. There will be many more to come. And with that Arsenal’s optimism was burst. The next pass backwards by them was booed and the fans frustration was bubbling over. There were more boos at half-time and it was as if those fans had never been away.

Mikel Ateta had summoned up a siege mentality saying “they” (whoever they are) could not break Arsenal’s “spirit” and here it had been broken. Chelsea smashed straight through it and although Arsenal were significantly improved in the second-half it was never enough. Maybe instead of worrying about outside noise Arteta should have organised his team better in that first period. Even the most basic of coaching courses would have pointed out, for example, that James needed to stopped down the right. Instead he remained unmarked.

YOU MAY ALSO LIKE:   IBUKUN AWOSIKA, FIRSTBANK'S CHAIRMAN MAKE ACTING DEBUT IN CITATION

Arsenal were without their £50 million signing Ben White after he tested positive for Covid but that was not the problem. It was simple organisation and, well, not being good enough. Three more times James should have picked out Lukaku who bumped and barged – or simply did so with clever movement – his way into space and Arsenal only escaped because the delivery was not good enough. Mari finally got close to Lukaku and was booked for bringing him down.

YOU MAY ALSO LIKE:   ZENITH BANK RANKED NUMBER ONE TIER-1 BANK IN NIGERIA

And then Chelsea scored again and – guess what? – it was James who claimed it. The move began as Chelsea worked their way down the left with Marcos Alonso’s pass infield intended for Lukaku. Granit Xhaka slid in but the ball ran to Mount who quickly, again, found James who, again, was unmarked and slammed the ball high into the net.

As the goal was scored Kieran Tierney could be seen throwing himself to block James. It was too little, too late.

Arsenal needed a lifeline and hoped they would get it when James appeared to bundle over Bukayo Saka in the penalty area. Referee Paul Tierney was unmoved and the decision stood after a Var check. Last season it probably would have been a spot-kick but the rules have been softened with the officials deciding there was insufficient contact. If Arsenal were unfortunate then they were lucky when an ugly lunge by Rob Holding on Alonso went unpunished. Last season that could have been a red card.

A fierce rising shot from Saka on the area’s edge was smartly tipped over by Edouard Mendy and Arsenal were also lifted by a charge forward from Tierney which followed a period of pressure when Lukaku again looked like scoring on more than one occasion.

YOU MAY ALSO LIKE:   'Nigeria May Not Celebrate Another Democracy Day If Buhari Fails to Listen To Nigerians' - Wole Soyinka

When Mari headed a corner back across goal it was met by Holding who surely had to score. But he only managed to send his own header the wrong side of the post. It was undoubtedly better from Arsenal, with Cesar Azpilicueta doing well to block Emile Smith Rowe’s goal-bound shot, who had started well before being overwhelmed. Arteta responded after 60 minutes by bringing on Pierre-Emerick Aubameyang although it was a surprise to see Saka give way.

But did Arsenal ever look like saving themselves? Thomas Tuchel turned to N’Golo Kante – what a substitute to be able to bring on – and that ended that with Lukaku appearing certain to score again when he met Mount’s cross. His close-range header, as he was too quick for Holding, was firm but Bernd Leno excelled in turning it onto the cross-bar and away for a corner. Leno then also blocked from Kai Havertz, who was teed up by Lukaku and should really have scored.

“Too easy,” shouted one angry Arsenal fan. For Chelsea it had been just that as they made it two wins from two and no goals conceded at the start of the season. Their record – with five goals scored – is identical to Liverpool who they face next weekend. It should be a closer contest as the boos rang out again at full-time from the Arsenal supporters who must already be wondering where their season is heading.