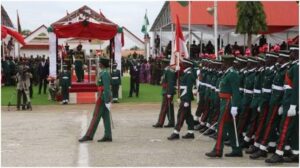 There was a mild drama on Saturday involving soldiers and the entourage of the Emir of Zazzau, Ahmed Bamalli, during the Passing Out Parade of 6,400 new recruits enlisted into the Nigeria Army.

A misunderstanding ensued between the entourage of the Emir and some soldiers maintaining security at the entrance of the Depot Nigerian Army, a development that forced the emir to return to his palace.

It was gathered that the soldiers at the gate insisted that the entourage of the emir must put off the royal musical trumpet blazing the area, and this the emir and his entourage found insulting.

However, the commandant of the Depot Nigerian Army, Major General Abubakar Ibrahim, with his lieutenants, later visited the palace to apologise to the emir.

The emir later returned to grace the ceremony.

The POP was scheduled for last Saturday but was postponed to honour the late Chief of Army Staff, Lt. General Ibrahim Attahiru, who died in a plane crash in Kaduna.

Late Attahiru said the Nigerian Army is determined to defeat all security challenges facing the country, as the Army has been professionally repositioned.

YOU MAY ALSO LIKE:   JUST IN: Lawmaker hints at Opposition plans to impeach Senate President Lawan

He said, with the passing out of the 80th Regular Recruits, the strength of the Army had been enhanced with the 6,400 soldiers, who have acquired all the professional training that made them combat-ready and efficient.

He urged the recruits to be patriotic in the discharge of their duties, assuring that the Army would not rest on its oars to deal with all criminal especially Boko Haram, armed bandits, kidnappers and IPOB.

YOU MAY ALSO LIKE:   ministers, VIPs stripped of police escort in Southeast, Southsouth