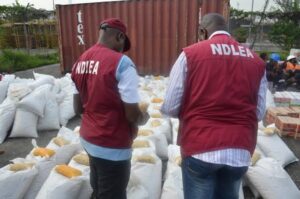 Operatives of the National Drug Law Enforcement Agency (NDLEA) have arrested a suspected drug dealer, Stephen Ikeanyionwu, who was declared wanted for allegedly attempting to export 69 kilograms of cocaine, heroin and cannabis to the United Kingdom.
Naija News reports that he was said to have tried doing this through the NAHCO export shed of the Murtala Muhammed International Airport at Ikeja, Lagos.

YOU MAY ALSO LIKE:   CAMA 2020: CASON Urges Churches to Reposition for Accountability, Growth

According to the NDLEA spokesman, Femi Babafemi, the suspect was traced to a popular Pentecostal church at Ojodu Berger in Ikeja, Lagos, on Sunday, August 15, 2021, when he was arrested soon after he stepped out of the service.

Babafemi, in a statement issued on Sunday, also said the arrest followed the interception of a consignment of illicit drugs weighing 69.65kg going to the UK through the Lagos airport on Thursday, August 12, 2021.

According to him, “the illegal baggage had been sent to the airport for export through a freight forwarding company, which in turn gave a driver to deliver at the NAHCO export shed.

“Following the arrest of the driver, follow up operations and investigations later revealed the true identity of the actual owner of the consignment, Stephen Afam Ikeanyionwu, who was arrested three days later in a sting operation.”

Also at the Lagos airport, operatives of the NDLEA arrested an Italy-bound passenger, Abibu Miminu, during the outward clearance of passengers on an Ethiopian Airways flight to Italy via Addis-Ababa for allegedly ingesting illicit drugs.

While under observation at the agency’s facility between Saturday, August 14, and Sunday, August 15, 2021, the trafficker reportedly excreted 68 wraps of heroin in three excretions, all weighing 800grams.