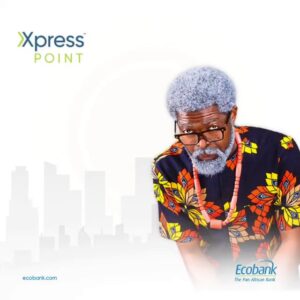 Ecobank Nigeria said its partnership with popular comedian and film maker, Bright Okpochia better known by his stage name Basketmouth on ‘Papa Banji’, a comedy web series, was to avail Nigerians entertainment on the go and to further confirm the bank’s status as the partner of choice for the African entertainment industry. ‘Papa Banji’ is a free to watch comedy web series showing on YouTube and can be viewed across the globe. Season 3 of ‘Papa Benji’ went live last Wednesday, months after season one and two premiered with positive reviews. Papa Benji tells the story of a man, his family, customers, everyone and everything surrounding them and how it impacts the society. It’s depiction of the life of an everyday Nigerian relies on the use of comedy to take one off the heat of daily hassles.

Babajide Sipe, Head Marketing and Corporate Communications at Ecobank Nigeria, said the bank’s decision to bring ‘Papa Benji’ to the screen from inception is to take entertainment to higher level, adding that the show also serves as a platform to showcase the bank’s ubiquitous digital payment platforms, providing people with entertainment whilst showing them how to bank hassle-free on their phones. This is banking at your fingertips which is endearing the Pan African bank to many Nigerians.

YOU MAY ALSO LIKE:   Former Ekiti Senator Gbenga Aluko Slumps, dies In Abuja

Ecobank Digital platforms includes the Ecobank Mobile app, USSD *326#, Ecobank Online, Ecobank OmniPlus, Ecobank Omnilite, EcobankPay, Ecobank RapidTransfer, ATMs, and PoS terminals. Also available to customers is an extensive distribution network of over 60,000 agency banking locations spread across the country. Specifically on the pervasive nature of the Ecobank Mobile app, Sipe said the app which is available for download on the Apple Store and Google Playstore makes it extremely easy to bank on the go 24/7, enabling customers to cater to their everyday banking needs anywhere and at any time directly from their mobile device.

YOU MAY ALSO LIKE:   June 12: Why I Served In Abacha’s Govt - Kingibe Opens Up

“Our Mobile app allows customers manage their accounts, send money, make payments, buy airtime, pay for services, and do other transactions across the 33 African countries where Ecobank is present. The mobile app is secure, reliable, convenient, and available to everyone. At Ecobank, we have just one Mobile App on Google Play store, unlike other Banks with different apps in the respective countries they operate. Our customers are able to send money instantly to the 33 African countries where Ecobank is present; transfer money to other bank accounts both domestic and international; transfer to a mobile money wallet in the same country; transfer money by email and SMS in the same country; and send money to Visa cardholders through Visa Direct. Other unique features, include the opportunity to open an Xpress Account; create and fund a Virtual card; set travel notifications for enhanced card security; block and unblock one’s bank card; attach other bank cards for transactions; as well as being able to add one’s banking profiles from different countries”. He stated.

YOU MAY ALSO LIKE:   Ecobank Rewards Xpress Point Agents, As Locations Hit 30,000 Nationwide

The web series of ‘Papa Benji’’ first season premiered with 13 episodes in December 2020. It stars actors like Bethel ‘Senator’ Njoku, Onyebuchi Ojieh, Nedu Wazobia, Jemima Osunde, Basketmouth, and a host of other comic stars. The online comedy series follows the life of its eponymous character, Papa Benji, an industrious Igbo man who took a loan to start his pepper soup joint, which attends to many other interesting characters that come into the joint. The series also interjects conversations about current issues of social relevance in a relatable manner.