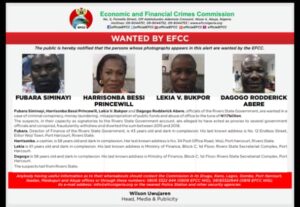 The Economic and Financial Crimes Commission (EFCC) has placed four Rivers State Government officials on its Wanted List. Among them is Mr Fubara Siminayi, the accountant General of Rivers State.
The officials, comprising three men and one woman, were declared wanted by the anti-graft agency over alleged criminal conspiracy, money laundering, misappropriation of public funds and abuse of office to the tune of N117billion.

The four officials are among the 59 suspects wanted by the EFCC for offences ranging from money laundering to obtaining money by false pretence, fraud, internet-related offences and issuance of dud cheques.

YOU MAY ALSO LIKE:   Lagos based business man wins TYLgames N1million grand prize

The four Rivers government officials include Fubara Siminayi, the accountant General of Rivers State, Lekia V. Bukpor, Dagogo Rodderick Abere, and the only woman among them, Harrisonba Bessi Princewill, a cashier.
According to the EFCC, the suspects, “in their capacity as signatories to the Rivers State Government account, are alleged to have acted as proxies to several government officials, conspired and fraudulently withdrew and diverted the sum between 2015 and 2018.”

It added that all the suspects hailed from Rivers State and urged members of the public with useful information as to their whereabouts to contact any of the Commission’s offices or the nearest police station or other security agencies.