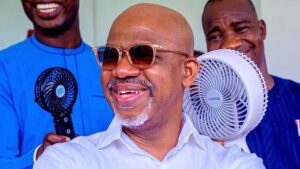 Supporters and stalwarts of the All Progressives Congress were treated to a hilarious session when the Governor of Ekiti State, Kayode Fayemi, officially referred to Governor Dapo Abiodun as the ‘Eleyi of Ogun State.’

This was even as the party’s presidential flagbearer, Asiwaju Bola Tinubu, labelled Oyebanji as the ‘Emi Lokan of Ekiti’ who would perform beyond the expectation of his people.

The banter took place at a political rally where the Ekiti governorship candidate of the APC, Biodun Olabanji, was unveiled to the electorate ahead of the June 18 election.

After Fayemi’s hilarious jab, a blushing Abiodun was seen giggling as party leaders patted him on the back in a jovial manner.

Tinubu had on June 3 set the social media on fire when he vented his frustration during a presidential campaign in Abeokuta, saying it was through his efforts that the President, Major General Muhammadu Buhari (retd.), made it to Aso Rock after failing thrice.

He also pointed at Abiodun whom he described as ‘Eleyi’ absentmindedly as one of the products of his political hard work.

“Look at this one (Eleyi) seated behind me, Dapo, he wouldn’t have become governor without my support,” Tinubu had stated.

Tinubu made the statement while addressing the APC delegates in Ogun State.

YOU MAY ALSO LIKE:   We Are Ready To Die For Our Country – Klitschko Tells Putin

His outburst evoked mixed feelings from Nigerians, with many loyalists of the party including the National Chairman, Abdullahi Adamu, saying the remarks were meant to slight the president and Ogun State governor.

YOU MAY ALSO LIKE:   2023: Oshiomhole Speaks On Presidential Ambition

The Director of the BAT campaign team, Bayo Onanuga, said that the comment was “mischievously interpreted.”