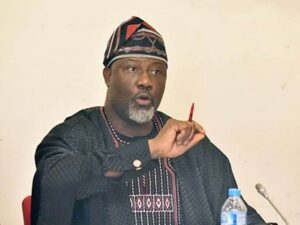 The former lawmaker representing Kogi Central district, Dino Melaye, has threatened to lead Nigerians to the streets for protest if President Muhammadu Buhari fails to sign the Electoral Act (Amendment) Bill 2021 into law.
Naija News had earlier reported that the President on Monday rejected the bill which was earlier passed by the National Assembly.

Buhari returned the bill to the National Assembly and asked the lawmakers to work on the clause that has to do with direct primaries and return the document for assent.

Melaye in an interview with Channels Tv on Tuesday said if the country does not get it right, everything will continue to go wrong.

He said, “If Buhari refuses to sign the electoral bill, he will know that Nigeria is not the Banana Republic. I will lead Nigerians to the streets for protest. A kind of protest you have not seen before and I am not afraid of anybody. This country belongs to all of us.

“Everything needed to revive this country is dependent on our electoral processes, once we don’t get that right, everything will continue to go wrong.

“I am for direct primary because democracy is supposed to be a government of the people by the people and for the people. Asking delegates to determine the faith of millions of people, is not democracy”.