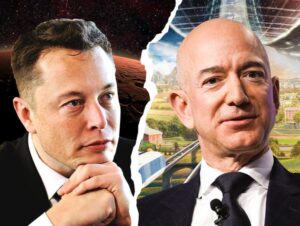 Is it a coincidence that the two wealthiest individuals on the planet are both nursing space transport dreams? Elon Musk and Jeff Bezos are both front runners in the two foremost and advanced space programs on the planet at the moment.

Although their motive, which is to kickstart some sort of backup civilization for human beings, align, both billionaires disagree on how to go about it. Before we dive into the disparity in Elon Musk and Jeff Bezos’ space visions, let us quickly examine their space programs.

Space X was founded by Elon Musk in 2002 and is headquartered at Hawthorn California. The goal of the company is to make Space travel affordable to ordinary people. It hopes to kickstart human colonization and inhabitation of planet Mars.

Space X is by far the more advanced of the two space programs. It has already put 700 Starlink satellites in space with over 120 being manufactured every month.

According to Business Insider, Space X is worth $33bn dollars

Blue origin was founded in 2000 by Jeff Bezos and is headquartered in Kent, Washington DC. Blue Origin aims to make access to space cheaper and more reliable through reusable launch vehicles. It believes it can put 1 trillion people in space making use of hanging colonies on space. Blue Origin is the less successful of the two programs having failed to launch a single satellite into space.

Elon Musk envisions a life outside the planet Earth. He strongly believes human beings can inhabit Mars in Mega Cities and it can serve as a backup to earth should World War 3 or any major global disaster occur.

YOU MAY ALSO LIKE:   Colin Powell, U.S. Army General Turned Top Diplomat, Dies of Covid-19 at 84

According to Business Insider, Elon Musk hopes to create the first sustainable city in Mars by 2050. The Company hopes to commence launching cargoes with building equipment in 2024 and hopefully, a permanent city would begin to take shape by the 2030s.

Elon Musk’s space company is valued at $33bn with its initial funding coming from his big payout from selling PayPal. He funds his SpaceX by getting contracts and investors for it.

Jeff Bezos and Elon Musk are the two richest individuals on the planet. Little wonder they can afford to pursue these ambitions. Elon Musk is clearly leading the space race with a more Robust SpaceX and cutting-edge drive, while Jeff Bezos, the older and richer of the duo seems to be taking his time. Jeff Bezos puts in more funds into his blue Origin Project while Elon Musk struggles a bit with funding Space X, relying on contracts and investors to get by.

YOU MAY ALSO LIKE:   Elon Musk's Space X launches 4 astronauts to Space on recycled rocket and capsule

Elon Musk is the younger of the two billionaires and exudes a youthful aura which sort of gives him an edge over Jeff Bezos. He is seen as the exciting youthful tech billionaire who was once smoking pot on live TV.