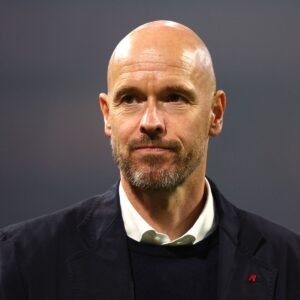 Manchester United manager, Erik ten Hag says he will focus on the players he has in the club for now rather than lose sleep over the absence of Cristiano Ronaldo.
Ten Hag says he will continue pre-season with the available players as nothing has changed about the situation of Ronaldo.

Naija News understands Ronaldo is yet to turn up for pre-season training after he asked to leave the club.

YOU MAY ALSO LIKE:   Finally! Police Arrest Serial Child Molester Who Has Defiled Three Minors In Lagos

But with just about two weeks to the start of a new season, the United manager says his focus is on players available at his disposal and whenever Ronaldo returns, they can look at how to integrate him.

“It is the same as last week,” Ten Hag responded when asked about the situation with Ronaldo.

“But concerning is maybe not the right word. I focus on the players who are there, they are doing really well, they are in good shape.

“I prefer to focus on that and develop that. I cannot wait for him to come in, then we will integrate him,” he added.

Naija News reports Manchester United will play their first game of the 2022/2023 campaign at home to Brighton.