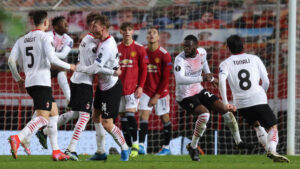 But Milan, who had already been harshly denied a goal when Franck Kessie’s first-half volley was ruled out for handball, replied when Simon Kjaer evaded the attentions of Nemanja Matic at a corner right at the death and steered a near-post header past Dean Henderson’s weak attempt to save.

It was the least a Milan side lacking former United striker Zlatan Ibrahimovic deserved.

It was tough luck on Diallo, who scored in quite brilliant fashion with his first effort on goal in only his third appearance for the Red Devils.

The Ivorian raced on to Bruno Fernandes’ brilliant chipped pass five minutes after replacing Anthony Martial at half-time, then, with his back to goal close to the penalty spot, looped the ball over Gianluigi Donnarumma and into the net.

Diallo’s entrance was delayed slightly as he had a band he was wearing on his wrist taped up. It was the only waste of time the 18-year-old was responsible for. It might only be his third United game but he already looks good value for the initial £19m United paid Atalanta for him in January.

Only Mason Greenwood, Marcus Rashford and George Best have scored European goals at a younger age for the club and for a long time, the inspirational effort seemed set to spare Harry Maguire’s blushes for a simply woeful first-half miss.

Maguire timed his far-post run to perfection as he arrived, unmarked, to meet Fernandes’ flick-on from an Alex Telles corner. Amazingly, even though he was barely half a yard out when he connected, Maguire ended up in the net but the ball did not as it flicked off the inside of the post and flew across the six-yard area to safety.

Martial went close in the opening stages but it was one of the Frenchman’s more ineffective displays and it only took five minutes for his replacement to upstage him.

But while the window of opportunity is open for Diallo, Henderson now fully understands the reality of life in the harsh glare of the spotlight at Old Trafford.

Henderson has performed pretty well in his 16 appearances for United this season, so much so it has been suggested he is ready to replace David de Gea as the first-choice goalkeeper at the club.

But mistakes on this stage get magnified in a way they do not at Sheffield United, where he did so well last season to take him into the England fold.

And the more often Kjaer’s goal was replayed, the more a view began to form that Henderson should have done much better in his attempt to keep it out.

In five previous two-legged European ties with Milan, United have emerged victorious only once and with Ibrahmovic potentially returning at the San Siro next week, Ole Gunnar Solskjaer’s men have their work cut out to reach the last eight.

Despite Ibrahimovic’s absence, there were still some familiar faces in the Milan side.

Diogo Dalot is still a United player but, unlike in the Premier League, Uefa rules allowed him to play against his parent club, while England defender Fikayo Tomori may yet have a future at Chelsea.

It is now more than two years since Brahim Diaz left Manchester City for Real Madrid.

Diaz was part of the same City youth team as Phil Foden and Jadon Sancho. Like Sancho, he decided there was a future away from Pep Guardiola.

Evidently he decided to use his return to Manchester to remind an English audience of his talent as he probed and prodded around the United box as Milan took control.

One through ball for Davide Calabria was exceptional but the full-back was unable to get the ball under control quickly enough.

Aside from Kessie’s disallowed effort, Alexis Saelemaekers drew a save from Henderson after stepping inside Matic’s outstretched leg and Rade Krunic put a header just over.

Kjaer ensured their efforts did not go unrewarded.