Home / cover / Ex Nigerian footballer, Ibezito Ogbonna, hospitalized after his home in Israel was hit by a rocket from Gaza

Ex Nigerian footballer, Ibezito Ogbonna, hospitalized after his home in Israel was hit by a rocket from Gaza 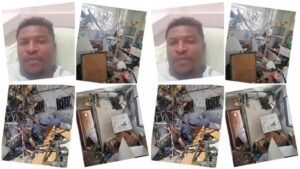 Israel based Nigeria footballer, Ibezito Ogbonna, survived a rocket strike fired from Gaza during the 11 days clash between Israel and Gaza last week.

BBC Sport reports that the former under 23 striker was home with his family in the city of Ashdod on May 17, when his apartment was directly hit by one of the rockets fired by Hamas militants in the heat of the Israel-Gaza face-off. Ibezito who sustained injuries from the explosion, expressed delight that his wife and kids were unhurt after the Hamas strike.

YOU MAY ALSO LIKE:   FBNBANK UK STANDS TALL AT 40, APPRECIATES ITS CUSTOMERS AND REGULATORS

“I am extremely lucky to be alive after this rocket was fired and it’s third time lucky for me after being involved in a car crash and a horrible robbery incident in Nigeria,” he told BBC’s Oluwashina Okeleji. It is difficult to explain the impact of what I saw. Coming out of this was a miracle. We are talking about the same attack that has left several people badly wounded,” he added.

“On this day I was having breakfast and I heard the wailing siren. Normally, we’d run to the shelter because every house has its own shelter. I felt it’s the normal warning, but within seconds it turned out to be an unlucky day for me. I heard the loud bang of the rocket and felt the immediate impact, I was thrown into the air and it took me from my dining room to my living room. I was in the hospital for a few hours. I was treated and had different tests just to check that everything was okay with me. They weren’t sure I was fine considering what had happened,” he said.