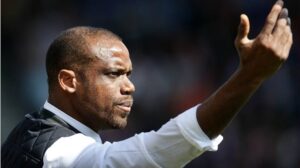 The club confirmed on Tuesday that 47-year-old tactician signed a year contract with the club which will elapse next year in June.

The fourth tier club announced thus: “Yes, Sunday Oliseh will be our new coach. A good 14 days ago we had delicious asparagus at the Straelener Hof,” president of the club Hermann Tecklenburg was quoted by waz.de.

He added: “That was a good conversation. In the last 24 hours, we were also able to discuss an employment contract until June 30, 2023. On Wednesday 21 June, Sunday will lead the first practice session. We look forward to working together.”

Oliseh had during his playing days played as a midfielder. He is widely regarded as one of the best African midfielders of all time.

In other news, suspected kidnappers have released a former Secretary-General of the Nigeria Football Association (NFA), Ahmed Sani Taro who was abducted last Saturday.

The development was confirmed by one of Taro’s sons, Nasiru. Nasiru while speaking with Daily Trust disclosed that the kidnappers released his father three days after he was abducted.

YOU MAY ALSO LIKE:   Last Place Sheffield United Stun Manchester United at Home

He, however, did not reveal the details of how the former Secretary-General of NFA was released.

According to Nasiru, the former Commissioner of Sports in Bauchi State was in a stable health condition.