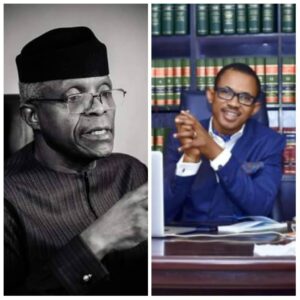 The owner at Castle of Law, Kayode Ajulo, according to information reaching us from grapevine sources, is presently on hot seat to explain the source of his new found wealth.

Sources revealed Ajulo, who just returned from a trip abroad where he stayed about 7 weeks, the longest he’s said to have stayed outside Nigeria’s shore in a long time, while away made some lavish acquisitions that include 3 airplanes, hectares of farm land and real estates in the Scandinavian.

It was learnt Lord Abraham Ajulo, as Kayode is also called, splashed funds in the region of about 3 billion pounds during the trip, which suggest he’s the richest lawyer in black Africa.

However, beyond the expected excitement this development has brought for the man in question, sources hinted the lawyer is under fire as there are questions in some quarters about where he could have stumbled on such stupendous wealth. Those who are concerned about Ajulo’s sudden wealth are wondering where and how he made such money despite his fierce advocacy, activism and anti-corruption crusades.

More interesting of the issue are speculations about where he may have gotten the money from, and major among those speculations is the one that links Ajulo’s new found wealth with the Vice President, Professor Yemi Osinbajo.

Ajulo, it will be recall played a very significant and daring role where he persistent and aggressively doled out legal permutation and speculations in rooting for the aspiration of the Vice President in the wake of APC presidential primary, in which the Law Professor eventually lost out.
However, no concrete mode of how the speculated alliance between Ajulo and Osinbajo resulted into fortune for the former, but sources insisted Osinbajo’s influence can not be excused from the entire calculation.