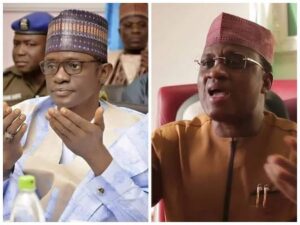 The crisis rocking the ruling All Progressives Congress, APC, is unabating as former Senator, Kabiru Garba Marafa, on Wednesday warned Governor Mai Mala Buni, who is the Chairman of the party’s Caretaker Extraordinary Convention Planning Committee, CECPC, to expel him and watch the party crumble.

Marafa, in a statement issued on Wednesday in Abuja, dared Governor Buni to throw him off the party and watch the party sink into more crisis.

Marafa advised the Yobe State governor to stop deluding himself as the national chairman of the APC, declaring that he is only chairman of the party’s convention planning committee.

Marafa, who represented the Zamfara Central Senatorial District in the last assembly, had on Sunday, threatened to institute legal actions against Governor Buni’s CECPC over what he termed gross violations of the party’s constitution in the conduct of party affairs.

“APC is a political party, not a committee. Committees are created to serve specific functions not to usurp the powers of the entire legal entity,” he stated.

“The function of the Mai Mala committee is to plan a convention just as its name implies. Mai Mala is the chairman of the APC convention planning committee and not APC itself,” he added.

Quoting section 12.3 of the APC constitution, he said the provision lists the party’s National Executive Committee NEC members “and it made the National Chairman of the party and not the chairman of any committee by whatever name as the chairman of the organ while Section 12.3 (xxxi) lists the President and Vice President of the Federal Republic of Nigeria as members only, so the question is; who approved the constitution and subsequent extensions of tenure of office of the illegal and obnoxious CECPC?”

“This is the situation we find ourselves. The Chairman of APC today is an overzealous chairman of convention planning committee only and a sitting governor”, Marafa declared.

YOU MAY ALSO LIKE:   “Was it an Inside Job?” – Fani-Kayode demands Investigation into Airforce Plane Crash

Marafa’s latest response followed a statement from the CECPC that was issued on Monday through its Secretary, Sen. John James Akpanudodehe, warning Marafa to desist from anti-party activities or risked being expelled from the party.

Responding to that threat, Marafa said, “Expelling me from the party will only aggravate the problem. It will herald the beginning of the agitation; rule of law must be respected.

YOU MAY ALSO LIKE:   One Dies, 12 Wounded In Failed Rivers’ Jailbreak

“The committee is illegal and alien to the constitution of the party. We are building everything on nothing. Rather than the expulsion threat, the committee or the chairman should respond to issues I raised,” he said.

“What does our party constitution says that renders Buni’s committee null and void? Section 17 (4) of the constitution of our beloved party, says ‘no officer in any organ of the party shall hold executive position office in government concurrently’. Article 20 states the only way the leadership of the party can evolve.

“Section 13.3(iv) which was relied upon to create the illegal body called CECPC talked about the power of NEC to create committees.

“Mai Mala should choose between Yobe or APC. The combination of the two is no longer tenable”, Marafa declared.

Marafa reiterated his determination to institute legal actions to save the party from what he tagged, “over ambitious Buni” if he refuses to revert to his original assignment as chairman convention planning committee.

“We will show him the way out dishonourably. We will not allow the party we contributed immensely to develop to be destroyed by over-ambitious, self-centred and enemies of the party, and the country.

“This is the party we laboured, toiled and laid the foundation for its success. We will not allow those who have little or no stake in the party to destroy it or to please certain individuals and achieve their selfish interests,” he said.

Marafa, while insisting that he has committed no offence, said the party should revert to the path of constitutionality and rule of law or face extinction.