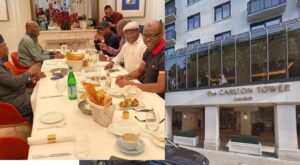 In a move expected to finally bring an end to their months-long rift, former Vice-President Atiku Abubakar and Governor Nyesom Wike of Rivers State met face-to-face on Thursday to resolve their differences.

Atiku chose no other place than The Carlton Tower Jumeirah, one of London’s top luxury hotels, to meet and pacify Wike who had become aggrieved at the outcome of the Peoples Democratic Party (PDP) presidential primary election won by him.

After the primary election, Wike was reported to have lobbied Atiku to pick him as his vice-presidential running mate but the Turakin Adawama would eventually settle for Delta State Governor, Ifeanyi Okowa, as his running mate.

The choice of Okowa over Wike which Atiku had described as a “difficult decision” resulted in constant jibes from the Rivers governor toward him.

After several failed attempts at reconciliation, Atiku and Wike later resolve to constitute committees from their individual camps to meet and resolve their quarrel.

While the committees’ first scheduled meeting did not hold due to failure to settle for a location, their second meeting did not yield the desired result as Wike was reported to have insisted on his demand for the resignation of Iyorchia Ayu, the party’s national chairman.
While the agenda of Thursday’s meeting in London has yet to be made public, it is strongly believed to be connected with the reconciliation moves.

Photos being circulated on social media showed that the meeting had in attendance Governors Samuel Ortom of Benue State, Okezie Ikpeazu of Abia State, and Seyi Makinde of Oyo State, who are some of the members of the reconciliation committees.

The photos also showed that the party leaders had dinner at The Carlton Tower Jumeirah which is dubbed “One of London’s Top Luxury Hotels” by Forbes.

YOU MAY ALSO LIKE:   Obanikoro Loses Senatorial Ticket To Ex-Deputy Governor Adebule

Findings by THE WHISTLER showed that a night at the hotel located at 1 Cadogan Place, London, costs as high as N3 million for the Royal Suite.

Owned by The Jumeirah Group, an Emirati state-owned global luxury hotel brand, the hotel underwent a $134 million (£100 million) renovation in 2019.

The five-star hotel is surrounded by some of London’s most fashionable shopping areas and boasts facilities such as private gardens and tennis courts, a restaurant, a bar, and spar treatment.

YOU MAY ALSO LIKE:   FIRSTBANK UNVEILS 2021 DECEMBERISSAVYBE CALENDAR, REINFORCES ITS COMMITMENT TO ENABLING DREAMS

Its flagship restaurant, Al Mare, offers modern Italian cuisine and traditional hotel breakfasts that guests can enjoy in a relaxed and luxurious atmosphere.

YOU MAY ALSO LIKE:   Rivers Govt, Ethiopia Airlines Agree on Permanent Flights from Port Harcourt

Its equivalent in Nigeria is the Transcorp Hilton Abuja. Rooms at the hotel range from N104,500 for ‘Two Double Beds Guest Room’ to N587,068 for the ‘Executive Presidential Suite’.

Previous 2023: Why I wore sneakers to NBA conference — Shettima
Next Buratai Calls On UN To End Global Conflicts As He Becomes First Bearer of Security Torch Worldwide