Home / cover / ‘Fani-Kayode Is Not Real, He Is Practicing Stomach Politics’ — Gov. Wike

‘Fani-Kayode Is Not Real, He Is Practicing Stomach Politics’ — Gov. Wike 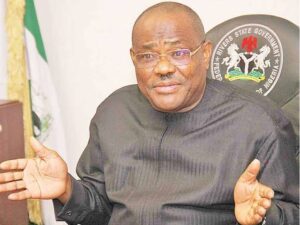 ‘Fani-Kayode Is Not Real, He Is Practicing Stomach Politics’ — Gov. Wike

Nyesom Wike, the Governor of the Rivers State has played down the significance of the defection of a former Minister of Aviation, Femi Fani-Kayode, from the Peoples Democratic Party (PDP) to the All Progressives Congress (APC).

According to him, Fani-Kayode is ‘not real’.

Recall that the former minister had recently defected to the APC and was warmly received by President Muhammadu Buhari in the company of some top APC members at the Aso Rock Villa in Abuja. He is expected to be formally received into the APC in Abuja next week. But Wike is not troubled by the PDP’s Fani-Kayode’s loss.

“I don’t know why people are shocked by Fani Kayode’s defection. People make the mistake of taking anyone who is vocal serious. Some people talk just for people to find them something to eat, some people talk because of the problems they have, so that they can be saved — if they will be saved. Femi Fani-Kayode and I are not friends. I don’t like something that is too artificial,” Wike told BBC News Pidgin on Friday.

He added: “Stomach politics is not good. Nothing beats integrity.”

Tags ‘Fani-Kayode Is Not Real He Is Practicing Stomach Politics’ — Gov. Wike