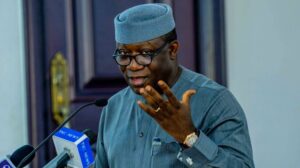 The Ekiti Attorney General and Commissioner for Justice, Olawale Fapohunda, said the inmates who were pardoned by the governor were serving various terms for offences such as stealing and housebreaking.

Fapohunda, who was represented by the Director of Public Prosecution, Julius Ajibare, said that the inmates were considered for clemency after recommendations by the Ekiti Committee on Prerogative of Mercy.

He said, “The beneficiaries are considered based on account of good conduct, remorsefulness and period left to serve at the centre,” as he advised them “to be of good conduct as they rejoin society, avoid conducts inimical to the peace of the society and shun vengeance”.

The AG also urged them to avoid anything that could bring them back to the centre.

Previous If Buhari can’t secure Aso Villa, his capacity to secure Nigeria is in doubt —PDP
Next I defile underage boys for ritual purpose — Notorious homosexual