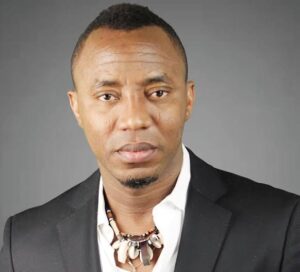 The Federal Government has reportedly deactivated the biometric identification of the publisher of SaharaReporters, Omoyele Sowore.
While the reason for the deactivation is yet to be made open, Naija News understands that Sowore’s documents allegedly deactivated include his national identity card, permanent voter card, international passport and driver license.

The development was disclosed in a publication by Sahara Reporters on Wednesday, January 12.

YOU MAY ALSO LIKE:   Just In! Another Military Helicopter Crashes, Many Soldiers Confirmed Dead

Naija News understands that the deactivation means the former presidential candidate would hence not be able to use any of the national documents to carry out any transaction within and outside the country as the cards cannot be read biometrically.

It could also be recalled that the Department of State Services, DSS had in 2019 frozen the activist’s account, alleged Sowore had received huge funds from the United Arab Emirates to overthrow the Buhari regime.

The allegation was later dropped when the DSS realised Sowore had never been to the United Arab Emirate, Naija News understands.

In December 2021, the court vindicated Sowore against the DSS after the agency seized his mobile phones and was awarded monetary damages of an N2million.

The DSS had sometimes accused the activist of planning to overthrow Buhari’s government by calling for a revolution.

YOU MAY ALSO LIKE:   FBNHOLDINGS: SETTING THE TONE FOR GENDER INCLUSIVENESS, BALANCE IN BOARDROOM

The government had since secured a court order that confined Sowore to Abuja, Naija News reports.