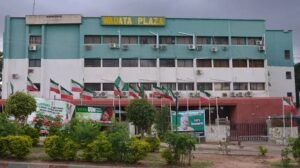 Akinwonmi, who was the Deputy National Chairman of the party in the South-West made the move shortly after he took over the affairs of the party, following the suspension of the party’s national chairman, Uche Secondus.

Ripples Nigeria reported yesterday that a High Court sitting in Port Harcourt, River State, on Monday ordered Secondus to stop parading himself as the chairman, or even a member of the PDP.

Explaining the reason for his action, Akinwonmi cited Section 35 (b) of the party’s constitution, saying it was a deliberate decision to allow for a broader consultation in the overall interest of the party, following the restraining order by the High Court, stopping Prince Uche Secondus from parading himself as the leader of the PDP.

Speaking in a statement made available to journalists in Abuja, Akinwonmi said, “Our attention was drawn yesterday evening to a court order, which purports to restrain our National Chairman, Prince Uche Secondus, from summoning and presiding over the meetings of the organs of the party.
“In the foregoing circumstances, as Deputy National Chairman (South) of the People’s Democratic Party, PDP, after the consultations and in exercise of the aforesaid powers, hereby deem it fit and proper to postpone the National Working Committee, NWC, meeting earlier scheduled for today until further, notice to allow for broader consultations in the overall interest of our part

“Section 35(3) (b) of the constitution of the People’s Democratic Party empowers me to summon and preside over party meetings in the absence of the national chairman.”

It would be recalled that before the restraining order, Secondus had scheduled the PDP NWC meeting for today (Tuesday) at the party’s headquarters, in Abuja.

YOU MAY ALSO LIKE:   Insecurity: Anambra Government issues fresh directives on use of tricycles, shuttle buses after 7pm.

However, in the court ruling yesterday, Justice Okogbule Gbasam barred Secondus from parading himself as a member of the PDP or its National Chairman, which includes preventing him from calling, attending or presiding over any meeting of the party, among others.